Arthur Powers’ experiences while living in Brazil seep into his short stories such the descriptions of brightly painted shacks, savvy street vendors and shady  samba schools in the big city slums or the night-time, pick-up truck ride through the swishing tall grass of the backlands, to the accompaniment of an orchestra of chirping and buzzing, insects, a chorus of tropical frogs and a solo performances by a screeching monkey. As night yields to the dawn, the overture of chattering birds greets the sun, but there is a darker side of the Brazilian experience.

Sixteen short stories portray life and death, heroes and villains in the backlands and slums of Brazil. Death’s familiar face appears everywhere, claiming family and neighbors through starvation, disease and violence, but the poor would rather face death on their own terms, resisting oppression by land-hungry speculators and their co-conspirators in the military government. Wealthy agricultural interests drive the subsistence farmers from the land they cleared and worked for decades, sending them to the crowded city slums until the land beneath their hovels appreciates to the point that wealthy developers push the slum dwellers to even more remote and unlivable quarters.

Who are the heroes that will save the poor? Religious, priests, lay-volunteers, doctors, lawyers, and even a man with a truck who is willing to give a ride to someone in need. Some heroes realize quickly that all their efforts can barely dent the growing mass of suffering. They sometimes break under the strain and may become villains in response to the pervasive injustice. Some never realize that their mere presence crystallizes the community to diamond hardness against the forces of oppression.

The most beautiful aspect of Brazil is the attitude of the poor who live out the belief that “we have very little, but what we have is yours.” Their willingness to share and the expectation that others will share when the need exists, underlies their ability to survive. They care for each other, offer compassion, hospitality and forgiveness to even their oppressors. Their hopes sprout dreams of what life might be in a just world. Heroes may lack the strength of the poor, but at least they sustain the hope that if the poor endure they may live to see the day when the meek inherit the Earth.

Arthur Powers, himself a master of the short story in the spirit of O. Henry ends his tales with a punch that may amuse or disturb. He deals out slices of life: romance, parable, fantasy, true confessions, comic relief as well as detours into hell. When Arthur Powers writes from the first person point of view, he engages the reader so completely in character, it is as if the priest, lawyer or doctor is present.

The Holy Spirit appears throughout the collected stories reminding the reader that “God hears the cries of the poor.” Although oppression devastates their bodies and souls, the Spirit guides, protects and holds out a welcoming hand to those who hope. Arthur Powers projects this hope shining through the dust and grime of both backlands and slums.

Powers, Arthur. A Hero for the People: Stories of the Brazilian Backlands. Winston-Salem: Press 53. 2013

A caricature can reveal more truth than a photograph. The Sisters of the Last Straw, reminiscent of the antics of Don Camillo in the stories by Giovannino Guareschi (1908-68), were in fact human. Thank God. Each had her own “fault,” be it a temper, an obsession or an addiction. Each nun had received her walking papers from at least one other congregation. Once they banded together, they formed an abrasive but loving community, a spiritual sandpaper rubbing their souls smooth and perfect.

The fragile tranquility of the community shattered over the presence of a dog, its puddles and plies, and its need for a home, anyplace but in the convent. The difficulties expand beyond the sacred enclosure to the neighborhood and the downtown area leading to the subsequent loss of Novice Kathy. The bumbling sorority’s attempts at untying the knots in the story-line, only tangled them further as the dog-sitting sisters prayed for the safety of their youngest member.

Although Sisters of the Last Straw fits into the category of juvenile fiction, for 6-12 year old readers, the chapters could serve as case histories used in community development workshops and retreats for religious congregations. Spiritual growth often depends on the establishment and growth of a peaceful living environment. Even saints sometimes wanted to brain a confrere. These good sisters, with all their faults were easy to love. They served as examples of humility. One of their greatest virtues was their ability to laugh at themselves, forgive and move on to the next disaster.

I treasure this gift to all of us from Karen Kelly Boyce and look forward to the next misadventure of the Sisters of the Last Straw.

Great pictures of scenes that most people never see.. 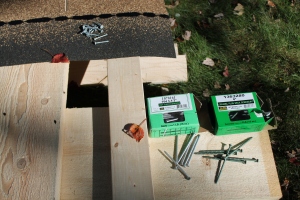 Here he comes, will he find me under all this junk? I had a restful night, but I knew it had to end. Pound, pound, pound, all day yesterday, today and tomorrow. I hope he knows what he’s doing. My claw end is all chaffed from nail-pulling. I hate the taste of those galvanized ten-inch nails. All right, he found me and I’m back in the tool box. Those other tools must have missed me, except of course for that aluminum level. Aluminum must be the poorest excuse for a metal that I know. Those tools are so light and shiny. They don’t rust, but boy do they get scratched and bent. I hate to tell the boss, but that level isn’t on the level. It’s always throwing off the measurements by a degree. Eventually that adds up.

Here’s the first nail of the day. Great, it’s steel-tough, like me. I can drive it with two whacks. There it goes, buried in the wood for years. Some archeologist will find it centuries from now and wonder, “How did they used to insert these fasteners into the wood fibers?” By then they’ll be able to get the nails to talk. “I was pounded by a high carbon steel professional grade carpenters hammer, made in the USA.” I wonder, will there still be a USA?

Please join me and other Catholic bloggers at Conversion Diary for 7 Quick Takes Friday. I’ve been light on blogging of late trying to get both the Kindle edition and print edition ready for publication. One down, one to go!

1. A Subtle Grace Kindle Edition Now Available
My new book is now available via Kindle. Want a copy? Just leave a comment below before Monday, March 24th. I’m giving away one FREE Kindle copy of A Subtle Grace. 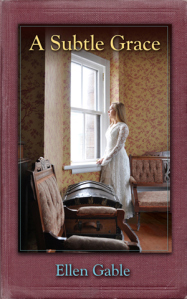 2. Print Edition Coming
The Print Edition of A Subtle Grace will be published in about ten days and I will be giving away free copies here on my blog. Stay tuned. 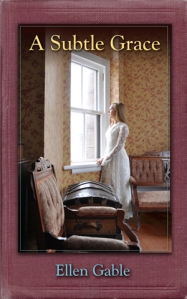 Kathleen O’Donovan gazed out her bedroom window, wondering if at the ripe old age of nineteen, she was doomed to spinsterhood, but soon she found herself the center of attraction, not all of it welcome. A Subtle Grace (O’Donovan Family #2) set in the late 1890s, is much more than a romance. The pen of Charles Dickens might have described the treatment of women, the poor and minorities by the villains of the day, villains not unlike those featured in modern tabloids. Gray’s Anatomy—not the TV series but the medical text—could serve as a reader’s companion as the story weaves through episodes with midwives and country doctors practicing their trades. The words from Colossians, “Wives be submissive to your husbands,” were interpreted in this novel by either a loving husband or a domineering rogue, with decidedly different outcomes.

A Subtle Grace shares the full human dimension of those “elegant” times, casting a new light on the once opulent mansions that remain in our older neighborhoods. The O’Donovan family projected affection, joy, warmth, concern, strength and harmony—in a word, love. As members of the upper-class, David, Caroline, their children and servants lived comfortably in Germantown, Pennsylvania, radiating an inviting grandness. The dialogue and formal behavior fit perfectly with the architecture of the times. The children’s respect for the authority of the parents, however, seemed unfortunately out of joint with today’s society—unfortunate that is, for today’s society.

Subtle hints of scandal trickled through the early chapters leading to a flood of unseemly behavior, discrimination, class-distinctions that mud-slide the plot down a darkening path toward suspense and terror, including depictions of violence. In stark contrast, the religious dimension stood against the sinister tide. Enthusiasm for the liturgy, conversions, the joy of confession, prayers, vocation to the priesthood were strong and unambiguous, and fit well with the story.

Even with such a large family and supporting characters, the author carefully developed each with his or her own conflicts, and loss ridden sub-plots, weaving through the other strands. The author supported the notion that happiness comes through discipline and respect, an ideal that deserves a greater attention in Catholic writing. For instance, I liked the choice of the name “David” for “Papa.” Like King David, his willingness to change his life, confess his sins to his children and church officials show him a strong and loving man. His tender love for his wife and his tough love for his sons show his depth of character.

I enjoyed reading A Subtle Grace and look forward to reading its prequel: In Name Only. I could see a TV series coming from these and future O’Donovan Family novels. Congratulations to Ellen Gable.
Gable, Ellen, A Subtle Grace. Pakenham, Ontario: Full Quiver Publishing. 2014.