Specter mixes the flavors of Romero, Ghostbusters, and The Terminator with generous glops of sour cream and salsa. John Desjarlais embroils his favorite DEA agent, Selena De La Cruz in a fictional parallel to the 1993 assassination of a Cardinal at the Guadalajara airport. She unearths the stench of corruption oozing from the Mexican drug cartels, the Vatican Bank, and the highest officials in the Mexican government. Unfortunately, Selena’s investigation suggests the involvement of her late father. She wonders if she can forgive her father not only for his possible corruption but his drunken violence toward her mother and herself.

As the story comes together, Desjarlais introduces the reader to Mexican culture, idioms and superstitions. Selena broke loose from the “old ways” that placed a premium on macho honor, exemplified by her father and brothers. Her father beats her mother and arranges a marriage for Selena with the tenderness of transferring the title of a car to a new owner. Her intended believes in using girls. When Selena punches out her father’s choice during his attempt to rape her friend, her father feels honor bound to compensate not the victim of the attack but the rapist, because of his damaged machismo. In spite of, or maybe because of her family’s indignation, Selena plans to marry an Anglo. However, her fiancé is older and has the same style mustache as Selena’s father. What would Freud say?

Selena and her brothers experience similar nightmares that remind them of their father. Their Madrina (Godmother) believes that their father is sending a message from Purgatory. Selena’s brother Francisco engages ghost-hunters, techies who record electronic disturbances, to record the family’s spectral visitations. Unlike Ghostbusters, this Chicago-based team invokes St. Michael, The Archangel before they track a spook and keep the phone number to the Archdiocesan exorcist on hand in case they need back-up.

In the midst of this fascinating backstory, Desjarlais subtly lays down threads of a dark mystery which soon envelops Selena, her family, and the Cardinal.  The pace of the novel accelerates like a super loud, growling “Beast” of a “Dodge Charger R/T with a 525 fuel-injected Hemi topped by a Stage V intake, a Gear Vendors Overdrive Unit, a pair of modified 600 Holleys, a pneumatic Air Boss chute and Flowmaster Super 40s to handle the exhaust” breaking 200 MPH along a drag strip.

Desjarlais’ spectacular climax features the gadgetry and explosiveness of a James Bond thriller, but with an O. Henry twist.

The name “Dolores” better fits the somber Selena. She is a grown-up tomboy with a major attitude. Everything goes wrong for her. The chip on her shoulder is nearly heavy enough to break her clavicle. In contrast, her Madrina shows the courage and fidelity of a martyr, adding a spiritual interpretation to the sufferings experienced by the De La Cruz family, especially its women.

John Desjarlais satisfies with this excellent buffet of culture, excitement, and spirituality. I look forward to reading the other books in his Selena series.

The Catholic Writers Guild provided me with an electronic copy of Specter, and I once attended a lecture by John Desjarlais. 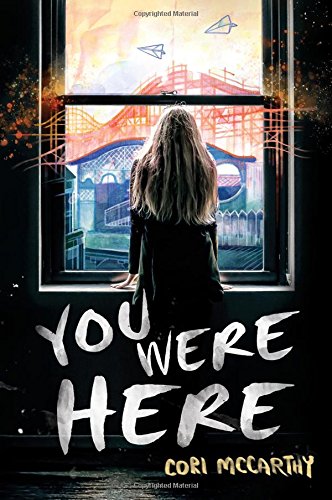 In an act of celebration, bravado, or maybe alcohol-induced insanity, Jake Strangelove stands on the top pipe of the playground swing set, still wearing his graduation gown. He backflips as he had done so many times before, but this time, he lands on his neck. Five years later, Jake’s life and death still haunt his family, especially his sister Jaycee and dozens of their friends.

Cori McCarthy explores Jaycee’s mangled life and that of her companions as they mark the fifth anniversary of Jakes leap into mortality. Fortunately, Natalie Cheng, daughter of an Ohio University psychologist, provides a running commentary on the mental state of Jake and his mourners.

Jake was left-handed, ADHD, and more than a little dyslectic. “Kids with learning disabilities often act out because of their frustration.” Professor Cheng told Natalie, “The neural insulation of your frontal lobe won’t be finished developing until you’re in your mid-twenties. You’re not fully aware of the consequences of your actions.” No wonder insurance companies want to charge higher rates for drivers under the age of twenty-five. Jake and all sub-mid-twenties humans remain half-baked when it comes to filtering out destructive impulses.

Jaycee Strangelove describes herself as a damaged girl with no hobbies, no passions, and no future. In fact, she shares a hobby with her late brother and Mik, one of their friends: Urbex or urban exploration.  Specifically, they visit the ruins of The Ridges, a shuttered, gothic, perhaps haunted insane asylum, Randall Park Mall a once illustrious but now abandoned shopping center, Geauga Lake, the shambles of what had been a huge amusement park and two other sites regularly explored by Jake. Their goal is to find traces of Jake’s presence—messages he left behind to commemorate his acts of daring.

The adventures begin on the night of Jaycee’s high school graduation. She drags along her classmates, Natalie, Zach, and Bishop. Mik meets them inside The Ridges’ dusty, relic strewn “lobotomy-central”–the first stop in the summer hunt for Jake-signs across the state of Ohio.

Cori McCarthy enlists the graphic artist Sonia Liao to speak for Mik and Bishop. Mik, a selective mute rarely verbalizes, so the chapters he narrates—appearing as portions of a graphic novel—uniquely link the prose chapters and amplify the noir quality of the novel. Bishop, a graffiti aficionado, summarizes moods of the moment throughout the book.

The characters represent tortured souls with no spiritual framework and no help from their families. Bishop grieves his lost lover after her cruel rejection. Natalie calculates how she will dump Zach although she still craves his bed. More and more, Zach takes refuge in alcohol. Jaycee lives to reunite with Jake while Mik, in many ways acts as a superhero but can’t even whisper his feelings for Jaycee. All of them have secrets involving Jake and his death that they may or may not divulge during the critical summer between high school graduation and the college-induced diaspora.

Can Cori McCarthy write her way out of this corner? What could reconcile and normalize the strains and unspoken yearnings before the last sunset of summer?

Fight for Liberty, Book Three in the Liberty trilogy, climbs to a dazzling climax, filled with plot shifts that will tantalize adult, juvenile and young adult readers.

In Book One, Chasing Liberty, an inner voice she calls “My Friend” directs nineteen-year-old Liberty 554-062466-84 of Aldonia to the realization that there is more to existence than a life totally dominated by the Regimen Custodia Terra. With the assistance of Dedrick, a member of the Mosheh, the underground insurgent leadership, she escapes to a remote sylvan colony but not to a life of contentment, as she knows her friends remain trapped in Aldonia.

In Book Two, Testing Liberty, the heroine infiltrates back into Aldonia to rescue her friends and imprisoned colony members, including all of their children, and to undermine the Regimen. She is captured and subjected to Reeducation, a form of video-game brainwashing. Like MacGyver, Liberty becomes more dangerous to the Regimen in captivity than on the loose.

In Fight for Liberty, the now tougher, more accomplished heroine comes into her own as a role model, especially for girls and women, following that inner voice calling them to greatness:

My Friend had never spoken to me as directly as he had these past several weeks. Since Reeducation, He led me to believe I would be instrumental in changing Aldonia, gave me hope that freedom would win out against the all-controlling government, the Regimen Custodia Terra. They controlled every facet of life from population numbers and education to ideologies and individual vocations. Considering all life of equal value, regardless of species, but humans akin to parasites, they had corralled people into cities and forbade entry into the Fully Protected Nature Preserves. We needed to bring them down.

The final push against the Regimen Custodia Terra begins, but instead of an orderly, focused attack against Aldonia, within its electrified fence Liberty, the remnant of the colonists from the Nature Preserves, and their superiors in the Mosheh face a tangle of conflicts.

Liberty’s love interest, Dedrick, doesn’t want her to commit to the Mosheh or participate in the upcoming attacks. The Torva, wild men—a cross between an outlaw biker gang and a Viking raiding party—will join the fray, but they won’t take orders from the Mosheh. They are more interested in owning the young women in the Regimen’s “breeding facility” than in freeing the people of Aldonia.

Previously captured colonial children have escaped from Regimen schools, but they have come under the influence of Guy, a one-armed shadow figure who will follow his own, separate agenda during the upcoming conflict.

Mosheh infiltrators of the Unity Troopers, the army of the Regimen, have found Trooper membership attractive. Silver, the mercenary, has tracked Derek into the Mosheh’s tunnel network. The Regimen would reward her for sharing this information. As dangerous as ever, Dr. Supero has become unpredictable after the treatment of his brain tumor. As the Mosheh subterfuge and subversion begins, no one is sure that their alliance will hold or that the good guys have accounted for all of the Regimen’s resources.

In Fight for Liberty, Theresa Linden has penned her most dramatic and suspenseful dystopian novel yet. The ending is anything but predictable. Although she resolves the many story lines at the end, the reader’s attachment to the characters sparks a hope that a sequel waits in the wings.

It is not necessary to read the series in order, but Liberty fans might prefer to watch the action build to a climax through the earlier volumes.