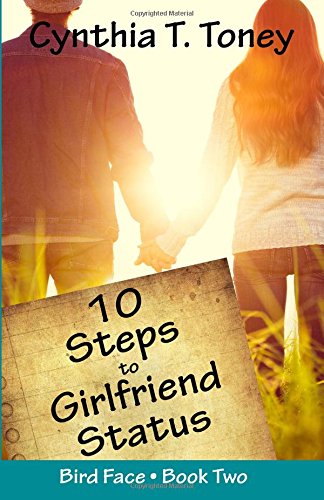 Adolescence is the most difficult time of life. How do we survive it? What with all the physical, emotional, external, and self-inflicted challenges, it is no wonder that many teens lose their way on the path to maturity.

In 8 Notes to a Nobody, Cynthia Toney’s first volume in the Bird Face series, Wendy Robichaud, with help from her friends learns to smile. As 10 Steps to Girlfriend Status follows 8 Notes to a Nobody, Wendy seems more confident. In fact, we see a daring and assertive Wendy. She grows close to her first boyfriends. She encounters the unstoppable forces that will separate her from Mrs. Villaturo, the only “grandmother” that Wendy knows. Wendy weathers the on-again-off-again friendship with her new step-sister Alice Rend. That’s enough stress for anyone.

As the title suggests, Wendy checks off each leap forward in her relationship with her boyfriend, David Griffin. Of course, for every step forward, there may be a step or two in reverse.

In addition to the “David loves Wendy” story, 10 Steps cleverly explores the emotional permutations of Wendy’s first year in high school. She moves in with a blended or step-family. She struggles to balance her parents’ rules while still enjoying dates with David. She suffers the slings and arrows of rivalries— Wendy vs. Alice, the David-Wendy-Sam love-triangle. She mourns as the erosive effects of Alzheimer’s Disease dim her relationship with Mrs. Villaturo.

Wendy resents parental and step-parental advice, even though her mom and “Papa D” share the scars of their own teen ventures into dating. Everything seems to fly out of control with no solution in sight until Wendy hears about the family secret.

Mrs. Villaturo rouses Wendy’s curiosity when she mentions a scandal involving Wendy’s great-uncle Andre. Detective/diplomat Wendy sets out to uncover and solve this mystery. “Inquiring minds want to know.” She deliberately invites Alice to a road trip to bayou-country where answers may dangle amid the Spanish moss. Besides, Alice has her own not-so-mysterious reasons to visit great-uncle Andre’s relatives and their neighborhood crawling with alligators and snakes.

Excitement, conflict, mystery, and infatuation march through the pages of 10 Steps to Girlfriend Status. The reader learns that Wendy’s heart is big enough to love selflessly and tender enough to ache and break as tragedies past and present unfold. The reward for her love-quest comes in the form of a closer and deeper relationship with every other character in the book.

Cynthia Toney caps off her engaging story with discussion questions and resources on the topics of teen dating, teens and Alzheimer’s disease, blended families, and stepfamilies.

She and I belong to the Catholic Writers Guild Fiction Critique Group. She provided me a review copy of 10 Steps to Girlfriend Status, which proved to be a joy to read.

Ten years in the writing, 8 Notes to a Nobody is required reading for any family with adolescents. Cynthia T. Toney packs her pages with humor, realism, and insight. She also deserves an MS degree as a Master of the Simile for this stylistic labor of love.

Wendy furtively flees, steering clear of the marauding cliques: the Suaves (the designer-clad guys), the Sticks (the anorexic fashionista  girls), the Jocks, and others who swagger atop the pecking order. An unseen witness passes encouraging sticky notes whenever Wendy is attacked. Hoping that a guy is writing to her, Wendy sighs: “Why couldn’t I be the one who was lucky enough to be born so pretty that everybody liked me?”

Her mother, absorbed with “adult problems,” advises, “Try not to let this upset you too much.” Not much help there, so Wendy mounts her bike, her “[s]crawny leg muscles work[ing] to put as much distance between [her] and [her] life as possible.”

The advice she gets from Jennifer, her friend almost from birth (wise beyond her years) not only sets Wendy on a path out of life dominated by bullies, but can guide anyone suffering from verbal and physical abuse in all its forms. Wendy learns that her most understanding allies are fellow sufferers.

Considering the treatment she receives at school and home, Wendy asks, “Why should I be the one to change?” Struggling to cope with the bullies, she reminds herself that eagles, too, have a “bird face” and spreads her wings to fly into a new, but not necessarily trouble-free, life.

8 Notes to a Nobody explores forms of adolescent abuse and their consequences, including suicide. Even the kids on the top of the pecking order may be the victims of unhealthy expectations to which they can never measure up.

Cynthia Toney supplies an extensive list  of resources and a set of discussion questions, making 8 Notes to a Nobody not only a lively read, but a powerful friend that should be welcomed in every home, junior high school, and middle school. 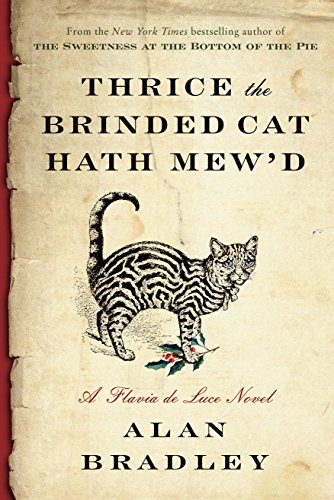 Flavia de Luce fans stand to applaud her return from her interminable trials in the tundra of Toronto. Unfortunately, her family barely recognizes her existence. “Like a pair of sick suns rising, (her sister) Daffy’s eyes came slowly up above the binding of her book. I could tell she hadn’t slept. “Well, well,” she said. “Look what the cat dragged in.”

“As if from some molten furnace, a new Flavia de Luce had been poured into (her) old shoes.” Now the chatelaine or mistress of Buckshaw, Flavia seeks her social level among adults, especially Cynthia, the vicar’s wife. Cynthia sends Flavia on a simple errand that quickly plunges the de Luce heiress into the realm of murder, veneered in witchcraft. With an appropriate malapropism, Mrs. Mullet warns, “there’s no good comes of meddlin’ the “Black Carts.”

To set the scene, the author borrowed his title–Thrice the Brinded Cat Hath Mew’d–from an incantation first published in Macbeth. He lists a cat among his characters and no cats were injured in the telling of this Flavia mystery. The same can’t be said for chickens.

First, on the scene of an apparent homicide, Flavia attempts to unravel the mystery before Inspector Hewitt finds her out. This more independent Flavia tracks her clues to London where she meets her Canadian chemistry teacher and a member of the top secret “NIDE,” Mrs. Bannerman. From now on they are Mildred and Flavia.

Books, publishers, woodcarvers, child-stars, bones on the beach, winter fest, Horn Dance, and off-key singers muck through the trail of the murderer. Flavia courts danger in the graveyard and risks a running through. Flavia fans will always remember this volume for a particularly shocking revelation.

Like one of Flavia’s character who “left the thought hanging like a corpse from the gallows,” I leave the plot to discuss what matters most to me in an Alan Bradley novel. Although the mysteries weave and knot within a most fascinating skein of clues, it’s the polish that he rubs into his phrases that I most love. For example:

The vicar’s wife hears things that would peel the paint off battleships.

How many murderers have been undone by a blurt?

Since the British Lion was a kitten.

Her voice hung shrill in the air like a shot partridge.

The kind of person who makes your pores snap shut and your gullet lower the drawbridge.

In the moonlight, even the kitchen garden glowed, the red brick of the old walls illuminating the dead beds with the cold, faded glory of silver.

Plumb wooden cherubs that simpered and leered at one another as they swarmed to their mischievous task.

The vicarage was especially damp and soggy, with an aura of boiled eggs and old books—a perfect setting for our encounter: dark brooding, and simply reeking of secrets and tales told in an earlier time.

Distant electric lights come on in other people’s homes, mere pinpricks in the gloom—mirages of happiness.

We seethed, like a mass of jellyfish, toward the station’s exit.

His office was like a cave carved into a cliff of books.

Stuck his little finger in his ear and wiggled it about a bit, as if fine-tuning it for truth.

A slapdash scrawl, as if the white heat of composition had overcome penmanship.

A kind of happy gloom.

It’s rayon, nitrocellulose by another name. It makes me feel explosive.

Someday, my prints will come.

Blackened bombsites still remained scattered round the church like rotting teeth in the mouth of some ancient duchess.

Finbar’s eyes swept slowly round her, like a lighthouse in the night.

Sad music began to ooze from the horn.

A book best read behind closed—or even locked doors.

One of London’s last remaining gas lamps flickered bravely and forlorn against the growing darkness.

As slick and soft and insincere as black velvet at a funeral.

Old Hanson was livid, but my father was incandescent.

I had a rather crush on Mother Nature. I did a bit of botanizing.

The wind moaned among the tombstones.

Some sleeps are washed with gold, and some with silver. Mine was molten lead.

This sampling should stoke the reader’s appetite for the hundreds of delights hidden throughout Thrice the Brinded Cat Hath Mew’d. Alan Bradley leaves Flavia hanging precariously as the last page turns. What will become of her? How long must we wait until volume nine and a half?