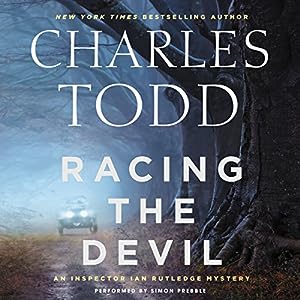 Racing the Devil is the nineteenth book in the Inspector Ian Rutledge Mystery Series and a tantalizing read. Like many previous Rutledge Mysteries, in Race with the Devil, the Inspector chases after a mass murderer who attacks anyone who obstructs his or her dark ambitions. Targets include Rutledge.

Seven British Army officers pledge to meet in Paris, a year after the eventual conclusion of the Great War. The five who survive the trenches find that their battles continue after the Armistice. Someone, perhaps one of the five, tries to kill the others.

A year after the Paris reunion, a motorcar belonging to one of the five crashes in a Sussex village near the lime cliffs known as the Seven Sisters, killing the driver. The local constable calls “The Yard” for assistance. Enter, Inspector Rutledge.

The novel’s subtext speaks of the wreckage left in the wake of war—depopulation, especially among the best and brightest of the young men; grotesque physical and emotional wounds among the survivors, and the remains of their families; and the rusting remnant of the nation’s infrastructure. So many horses die in the war that unemployed blacksmiths turn their smithies into automobile repair shops—a salient detail in a story focused on cars and “accidents.”

Rutledge fans will notice a diminished role for Hamish Macleod. Hamish stars in his own, recent short story: The Piper, but his scarcity may say more about Rutledge’s long-term health than anything else.

Charles Todd offers his readers, in addition to a tense, absorbing mystery, a travelogue of Southeast England, circa 1920, a prose rich in imagery, and period references. The reader would be wise to consult a detailed roadmap of the United Kingdom to follow the action. Online searches for images of the local landscape and geological features can add perspective.

Todd’s time machine douses readers with frequent rain, guides them through the tents and booths of market days, feeds them sandwiches, cakes, and pub fare, and nearly drowns them in tea, whiskey, port, and the ever-looming pint. Todd reanimates regional traditions and institutions such as the town constable. Rutledge encounters an assortment of local policemen and learns the value of those who have served long and well. They know everyone in and everything that happens on their patch. Then, there are the others who guard their turf and milk it for any benefit it may bring to themselves.

A master craftsman, Charles Todd can be counted on to ratchet up the level of suspense and conflict. He leads his readers on a merry chase by introducing squads of characters with means, motive, and opportunity. Just when the guilty individual seems to have been arrested, Todd saves another major wrinkle to unfold.

Race with the Devil is never boring. It’s the type of story where the readers may glance at the clock to realize that Todd has kept him or her up beyond the normal bedtime hour. The only regret is that fans must wait another year for volume twenty.