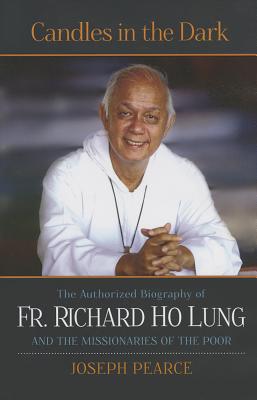 Joseph Pearce writes that Father Richard Ho Lung, known as the “Reggae Priest,” the Ghetto Priest,” the “Dancing Priest” and the “Renegade Priest” would rather be known as a “practicing priest,” setting a high standard for all clergy. Pearce suggests that Fr. Ho Lung may be the happiest man in the world. What is his secret? Pearce recalls his search for an answer during his visit to Bethlehem, a residence for severely disabled children: My…

“…eyes met the twisted and tangled bodies of broken childhood. There, in rows of cribs, one after another, children of all ages, from babies to teenagers, wriggled and squirmed in various degrees of helplessness. To my uninitiated gaze, it looked almost infernal, a place where the triumph of suffering seemed to call for the abandonment of all hope…. As I looked in stunned silence at the unwanted and abandoned dregs of humanity, bent by the brokenness of body or brain… I approached a girl of around eight-years-old…. As I took her hand, she returned my forced smile with a radiance of her own that transfigured the situation and exorcised the demons from my hardened heart…. Looking up at me was the radiant face of the child Jesus…. She had returned my pathetic effort with a smile that beamed with the light and delight of heaven itself.”

Pearce explains that Fr. Ho Lung and his Brothers derive their joy from their labors because they are more than social workers caring for the human needs of the poor. They are “servants of the broken body of Christ. Their work with the poor is not merely a job but a labor of love. They are laying down their lives for their friends.”

Born to Chinese Buddhist immigrants to Jamaica, young Richard Ho Lung had the advantage of not knowing he was poor. He lived without luxuries and even necessities, but his family gave and received assistance from their neighbors. Communal interdependence became a model for Father Ho Lung’s later efforts to relieve poverty in Jamaica. Young Richard’s only disappointments came when he witnessed his neighbors attempt to break free of their economic limits through self-destructive behavior: prostitution or robbery.

Franciscan Missionary sisters from New York served Richard his elementary education, spiced with music and evangelization. Richard (and eventually his family) accepted baptism. Buddhism helped Richard appreciate nature’s beauty. In Christianity he responded strongly to God as a person that he could embrace in the Body of Christ. Richard failed the entrance exam for the prestigious Saint George’ College. Fortunately, the Jesuit headmaster noticed something special in Richard, admitted him and guided him over the next four years. Life was good, but hurdles awaited Richard.

He attended the Jesuit’s New England house of formation during the spiritually turbulent 1960s. Fr. Martin D’Arcy, the famous English Jesuit warned his American confreres, “The whole thing is going to fall apart because we are too rich.” His warning proved prophetic. In 1983, a Jamaican newspaper reporter asked Fr. Ho Lung why the Jesuits in Jamaica had not a single vocation since he entered in 1959. He responded: “They have not yet come to grips with identifying themselves with the poor- at least not the American ones…. This mood (of self-centeredness), I think, prevents young men from choosing the priesthood.” Fr. Ho Lung left the Jesuits to establish the Brothers of the Poor, now called the Missionaries of the Poor.

Upon his return to Kingston, Jamaica he introduced reggae to the liturgy, not without controversy. Joseph Pearce recognized Fr. Ho Lung’s use of “traditional Caribbean music and rhythm” as an application an age old Jesuit missionary method of communicating with people in their own medium. Reggae brought the young to church, retreats and to personal prayer. The recording of “Sinner,” by “Fr. Ho Lung and Friends” originally intended as a fund-raiser for missionary projects topped the charts in the Caribbean earning Fr. Ho Lung fame as “The Reggae Priest.” Over time Fr. Ho Lung wrote dozens of religious songs, shows and operas in collaboration with his musical directors, Jon and Wynton Williams, the later a Baptist minister.

Civic and business groups, including the Rotary and Kiwanis Clubs invited “The Reggae Priest” to speak, but Fr. Ho Lung, “The Ghetto Priest,” gave the presentations. He criticized the Jamaican government’s staffing of social service facilities with political insiders rather than trained and caring workers. His descriptions of these grotesque environments embarrassed the government, but did stir the generosity of the private sector. He also challenged the Jamaican government’s willingness to accept foreign aid that promoted abortion as a solution to social problems. In response to the substantial needs in Jamaica, Fr. Ho Lung raised funds through concerts around the world, using the revenue to construct homes for the homeless, the deserted and the vulnerable. The Missionaries of the Poor thrived as it recruited from abroad to staff these homes and similar establishments in other countries.

Joseph Pearce allows Fr. Ho Lung to speak freely, challenging all Christians to embrace the cross and through it to find happiness. The reader is encouraged to appreciate her or his own existence and the beauty of creation, while recognizing the injurious spread of hedonism, materialism and convenience that lead to personal misery; physical and spiritual death. I strongly recommend this book to anyone in search of happiness, to those listening for their vocation in life and for anyone seeking to light candles in the darkness.