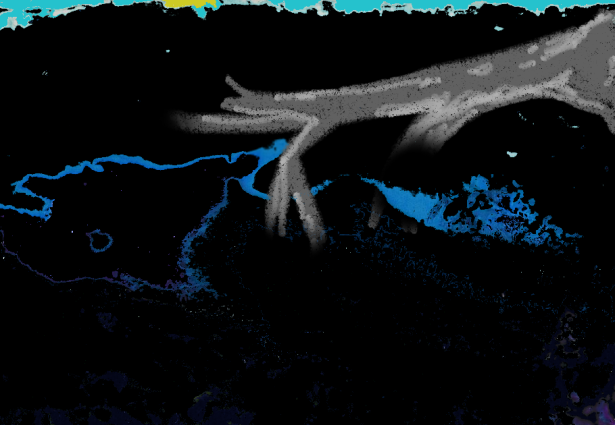 A piercing whistle shrieked. Pounding hobnails clacked against the cobbles warning Moocher Waage of imminent arrest. In desperation, he dove beneath the fence, bled among the green briars, and rolled down slope toward the stench.

“I hate this place, but they’ll not follow.” Waage surmised, the Gritville Constabulary would triage at the curb, deciding not soil their expensive uniforms in pursuit. Moocher knew they’d avoid the sulfurous and nitrogenous fumes, so he bowed, resting hands upon his knees to catch his breath.

He gagged as he inhaled the vileness of the pit, although it brought him some measure of safety.

One last precaution, he’d climb the maple’s long dead arm above the pit. That branch could crack and drop Waage into the putrid, blue-black bile. He’d trust his luck once more, confident that the constables would never reach him. They’d soon find another vagrant to badger.

The pit seemed more active this night and his bleached perch more brittle. “Was this the best hideout?” Waage wondered as he hugged the long dead branch. The moon rose in all its fullness, reflecting sunlight across the oily surface, smooth as a black, marble slab, but then a busy gaggle of bubbles popped and hissed releasing their ghastly pungence. While their frequency and foulness prompted reconsideration, a shadow flicked in the woods and Moocher distinctly heard the snap of a dried stick. Waage shifted to scan his surroundings. The moonlit trees reached toward him like specters, but no human threat.

The branch cracked and bent a centimeter closer to the tarry abyss. Waage shimmied back toward the maple’s main trunk but the branch dipped another centimeter and then cleft almost in half dropping Waage so that his face dangled a meter above the blue-black ooze. The limb-tip split the tar, prompting a fizzle of increasingly larger packets of stench to mar the mirror’s surface.

Waage’s hands now soaked with sweat slipped along the sagging branch toward the shining tar. Larger bubbles jarred Waage out of his terror-trance with their pungent sulfur and ammonia mix.

Waage squelched a scream. “It must be the monster, long imprisoned below.” He breathed, “What do you want?”

Waage, not one to help his fellow man seemed in no position to refuse this putrid gasp. “What’s in it for me?” he whispered.

The slime growled back at him, “I’ll give you a home. You’ll never feel hunger nor fear, nor will the constabulary find you, just help me flee.”

Waage snorted, “I can’t help myself. I don’t know what you are or how to help you. Maybe you will eat me for my troubles. Maybe you belong in the pit and should stay there.”

It spoke more clearly, “Go to Phlegm Dredger in the capitol. He’ll know your smell and you his. Tell him there is a rich deposit of hydrocarbons and gold as yet unclaimed. Ask for a substantial finder’s fee. Bring him. I’ll see he pays.”

Waage felt the branch rise and he began to slip back toward the trunk. He dismounted as a melon-sized bubble burst, releasing words. “See, I have saved you, now do as I ask and bring me help.”

Waage scampered up the slope, scanned the cobbles and made for the train yard. He climbed aboard a northbound flat-car and squeezed beneath a tarp-covered tractor to rest and wonder. “What’s this about? Will I be safe or sorry? It’s all too strange.”

Hours later, the sun rose behind the capitol. Phlegm Dredger needed little convincing and trucked Waage back to the tar-pit. Waage waited in the shadows just inside the wood. Soon enough, Dredger emerged, drove to an ATM, handing Moocher more money than he’d ever seen. Dredger dropped Waage at the bus terminal, advising that “A sea-side vacation would benefit your health.”

Dredger departed sending Moocher toward the terminal’s gift shop, where he bought a one-way ticket and a change of clothes. He washed and dressed in the bathroom, and zipped his money into his new jacket. He found a place to sleep aboard the bus. When he woke, through the window he noticed the boats, bridges and finally the sandy beaches. The bus lurched to a stop, hissed and disgorged its load.

Moocher rented a sleeping cubicle at the sea-side terminal, his new home.

Between the sea and the showers Moocher had never been so clean. He even bought a toothbrush and a bar of soap, nonetheless he felt dirty. His suspicions of evil fleshed out when he heard of riots and violence back in Gritville. Meanwhile, Phlegm Dredger had come into a fortune of hydrocarbons and gold. Dredger surmised that the pit-monster had escaped.

“What have I done?” he asked. I’ve caused more misery in Gritville and increased Dredger’s wealth. How soon will the constabulary find me and bring me back? Perhaps they’ll throw me in the pit.” Crestfallen, he walked to the ocean.

“Sharks! Sharks!” the lifeguard called. Moocher shaded his eyes to see small boy atop a surfboard unaware of the fins about him. Moocher waved, jumped and yelled to no effect. He ran into the surf to warn the child and awkwardly paddled towards him. A shark bumped into Moocher’s leg and then another nudged his ribs. He knew that the next shark would bite him and the frenzy would shred him and maybe the boy.

A shadow blocked the sun. A swooping darkness snatched Moocher and the surfer, pinching them in the clutches of an immense blue talon. It smelled familiar.

It set its load upon the beach, allowing the boy to run-off screaming, but the beast wrapped Moocher gently with a thirty kilogram chain of gold. It belched, “Thank you. This gift once bound me, sinking me in my own greed. See that you own and use this gold to help your neighbors. It shouldn’t own nor use you.” Stunned, Moocher watched the blue-black dragon vault into the sky leaving him a wealthy, wiser and better man. 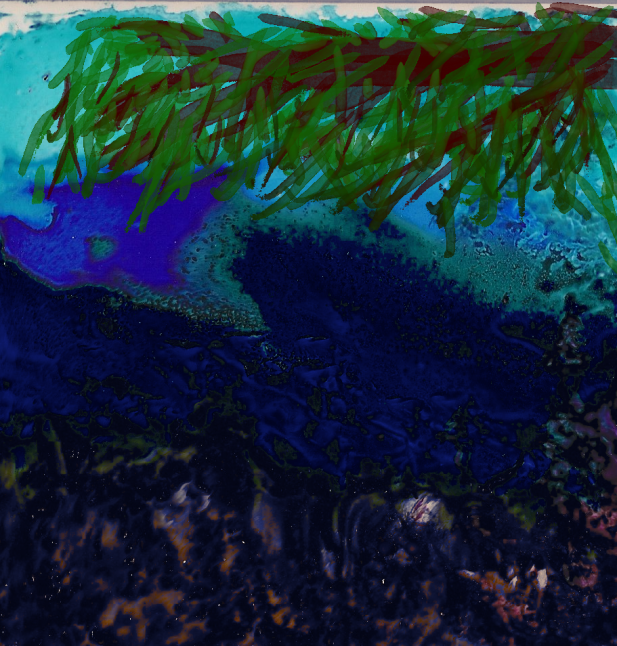