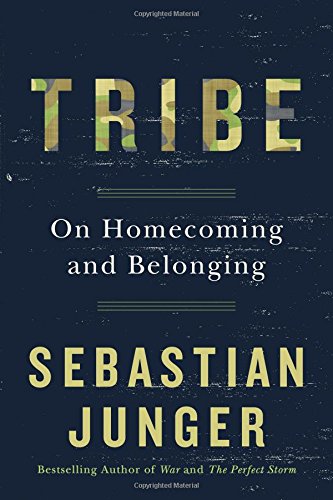 “The United States is so powerful that the only country capable of destroying her might be the United States herself, which means that the ultimate terrorist strategy would be just to leave the country alone. That way, America’s ugliest partisan tendencies could emerge unimpeded by the unifying effects of war.”

Polarization, random violence, and racial injustice disturb the domestic tranquility. Sebastian Junger, the author of A Perfect Storm, points to root causes and possible solutions to a growing national fratricide. As a war correspondent, Junger regularly observes the formation of “tribes”— fiercely loyal, egalitarian, classless, aggregations of humans that align their attitudes and values for the survival of every member.

He recounts examples of how humans meet disaster with amazing courage, composure, and unity. During World War II, the London Blitz and the Allied bombings of German cities brought local civilians together in air-raid shelters, forming them into classless communities that not only survive but thrive. The rate of suicides drops below peacetime levels, and industrial production increases as the bombing continues. He notes that persons of different social classes and background forget their differences and unite for national survival.

Because of war and other traumas, local ad-hoc groups exhibit the collective effort typical of the tribes that flourished in North America before the European invasion. After the war, the denizens of bomb shelters often go back to their individual lives and the tribal connections fade. Although they hate the war, some miss the closeness they experienced in the shelters.

The traditional Indian grouping is the band or clan of about fifty individuals. Its members work to preserve tribal unity because, without it, they could not survive. Migratory bands limit their personal property to what they could carry from campsite to campsite, reducing their ability to develop class distinctions based on wealth. After the hunt, every band member receives an equal share of the quarry ensuring that all survive, but none accumulates more than the others. Hoarding or selfishness by a few individuals endangers the rest of the group, so it is not tolerated. Neither are slacking or bullying.

One of the modern equivalents of the tribe is the military platoon. Soldiers live together, fight the same enemy, and, at night, sleep under the same roof. They share everything in common and build an intense bond that despite the external dangers and privation gives the band of brothers and sisters a feeling of belonging. They share a common cause, the safety of their platoon and their country.

Unfortunately, when veterans return to their homes and families, they not only miss the comradery of their platoon, but some are made to feel unnecessary. They notice that civilians seem more intent on serving themselves than the society as a whole.

Junger relates the typical veteran’s homecoming experiences to PTSD, disaffection, and violence. He suggests several practical responses to the needs of returning veterans and more generalized recommendations that urge society to embrace stone-age tribal values as a solution to many of our information-age problems.

Although Junger does not mention it, the characteristics and harmony of stone-age tribal life continue to exist in both monasteries and the persecuted church—“See how they love one another.”