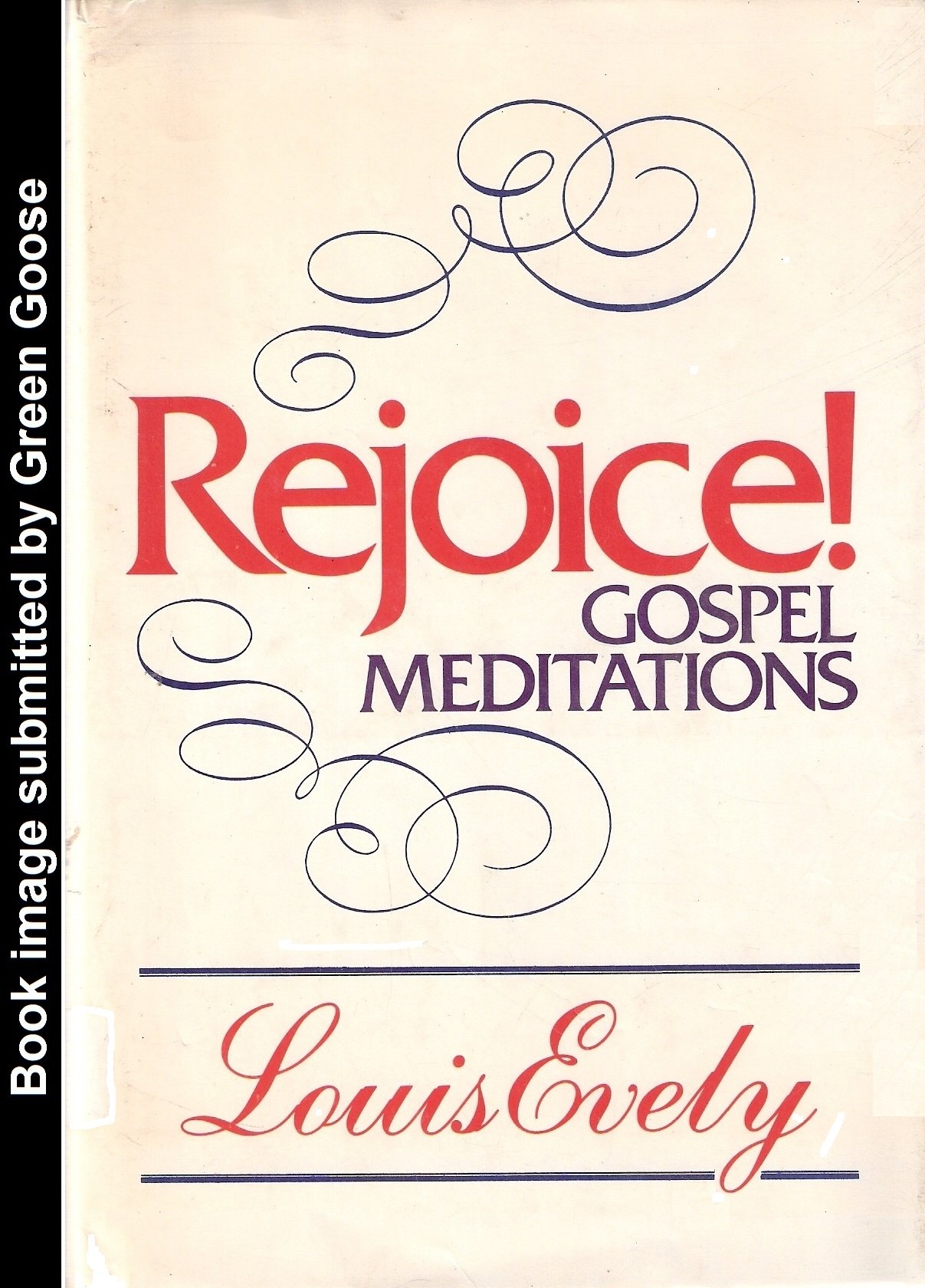 Lent invites us to refresh our souls, to refocus our lives, to set things right. Rejoice! by Louis Evely, has a way of growing us out of our comfort zones into the light. It challenges us to lift our crosses and follow Jesus. Evely writes: “There were times when Jesus was frightening in his logic, frightening in his relentlessness. He went beyond what was said of him; beyond the half-measures at which the Law had reasonably stopped. Jesus allowed nothing to stop him. He knows only one law: love. And from that law, he draws consequences with logic, which must either electrify or repel his followers.”

Consider the tax collectors and harlots who flocked to the desert to see St. John the Baptist. They asked John, “What must we do?” To their surprise, John told them, “If anyone has two tunics he must share with the man who has none, and the one with something to eat must do the same.” Luke 3:11.  To approach God who we cannot see; we must first approach our neighbors, especially those in need. The message of John and later Jesus electrified their followers. Imagine the joy among the penitents at finding the path to forgiveness and love. Imagine the community that benefits from their joyful giving.

Consider the Pharisees. Why instead of the Pharisees, did the likes of Matthew, Zacchaeus, other tax collectors, sinners, and prostitutes flock to Jesus? Unlike the Sadducees, the Pharisees believed in the resurrection and angels. They maintained their zeal for the Law and awaited the Messiah. “They should have been Jesus’ staunchest supporters.” On the contrary, many of them joined in the call for Jesus’ death. Evely explains that “The Pharisees were proud of their faith, their knowledge, their good works, and their religious observances. Therefore they were closed to God’s gifts and God’s forgiveness, for they did not believe that they were in need of either.” They believed that they had saved themselves through their rigorous observance of the Law. In their assumption of righteousness, they not only rejected God’s mercy, but they refused to extend mercy toward the unrighteous. Imagine their frustration when Jesus said that they had to change their whole approach to God and that their earlier efforts may have placed them behind the hated tax-collectors on the path to God. The message of Jesus repelled them.

Evely used the Parable of The Prodigal Son to compare the Pharisees to the tax collectors and sinners. The older son keeps the Law, but he does so, resentfully. The prodigal, like the tax collectors, rejects the discipline of the Law, but at least he realizes his sinfulness. He is willing to confess to his father and beg a place among his servants. The father, like God the Father is something of a prodigal in his mercy toward the younger son. God squanders love on sinners and reproves the cold-hearted legalists. God’s ways are not our ways.

Evely observes, “It is one of the paradoxes of human nature that we often find more generosity, compassion, and willingness to serve among libertines and loose women than among our moral rigorists.” To underscore his claim, he cites the Parable of the Vineyard Workers. Those who endured the heat of the day received the same pay as those who worked only one hour. Evely writes that those who worked longer should have rejoiced at the good fortune of the last to arrive. The day-long workers grumbled at their fair wage, but Jesus made the point that the vineyard owner was free to do with his money as he wished, despite how it appeared to the workers. God’s ways are not our ways.

If we proclaim Jesus in our liturgy, we must live according to His teachings by radiating God’s love. “God is no more and no less visible than love itself,” Evely writes. “Other men see it and know that the Spirit of God is present. In the early church, only men ‘filled with the spirit’ were chosen for important missions. And the pagans said of the first Christians, ‘See how they love one another!’ The love of these Christians was such that, through it God Himself was made visible.” The lives of the early Christians proclaimed the Law of Love. In loving, they won the culture war against their pagan environment. Why today, have so many churches closed or serve only the elderly? Why today, do some Catholics fear the lure of the secular culture? Shouldn’t they be more concerned about cold-hearted Church members who lack the compelling love that denoted the early Christians and attracted new Christians?

Wishing you an invigorating Lent, one that brings rejoicing.

Louis Evely also wrote a collection of meditations focused on the Easter-Pentecost season: Joy: Meditations on the Joyful Heritage of Christianity. 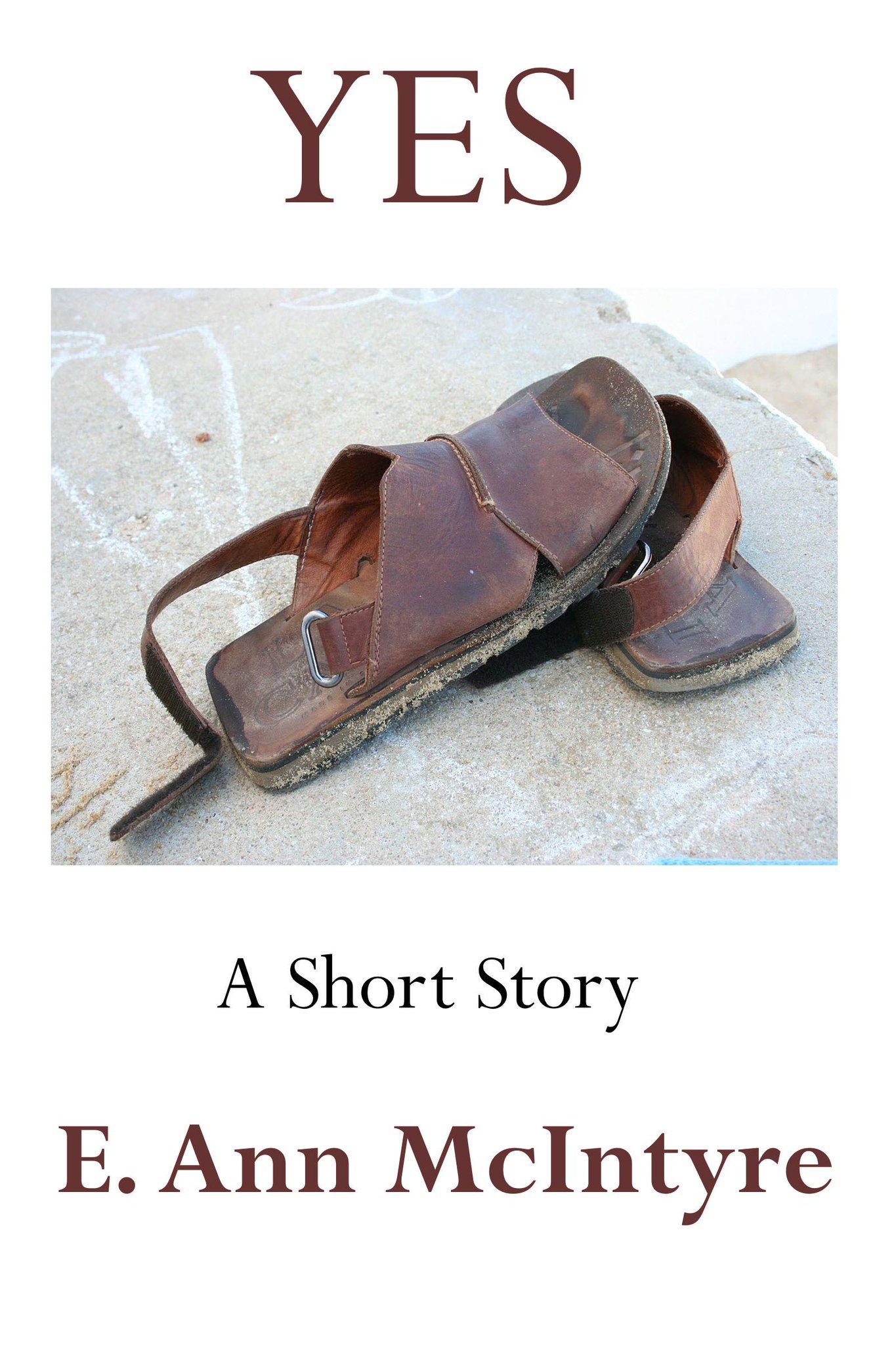 During a cold and damp Lent, Yes, a homeless immigrant, barely survives his crossing of the Mediterranean to Italy. Suffering from pneumonia and a multitude of injuries, he finds shelter among Bernini’s colonnade in Vatican City, drawing disdainful stares from Christian tourists and members of the curia.

Thanks to the outreach programs instituted by Pope Francis, Yes and his homeless colleagues of every faith, enjoy hot showers, haircuts, laundry service, second-hand clothes, a free-clinic and a daily hot lunch. Papa Francis continually surprises his guests as he welcomes them and personally attends to their needs. Yes remarks on Papa’s humility, mercy and service, especially during the Holy Thursday liturgy. Yes reciprocates in his own way.

McIntyre’s fresh approach to story-telling fuses the art of parable with social commentary, travelogue and mystery. She blends ancient and current events with only moderate fractures to the space-time continuum. Subtly garnished with scriptural allusions, this fast paced and colorful saga delivers an up-close and personal encounter with Pope Francis as he embraces the poor and strangers. McIntyre compares and contrasts the life of Christ in the gospels and modern church theory and practice. Yes serves as a launching pad for discussion groups and for private reflection. 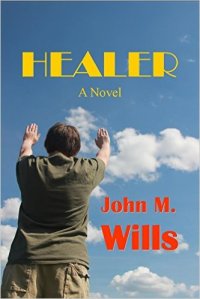 Healer reminds me of a Norman Rockwell print. Rockwell could transform the most ordinary, everyday events into the most extraordinary images. He filled his portraits with warm, happy, generous, uplifting people.

Hidden among a cohort of typical high school kids, Wills finds the extraordinary, the superhero — the healer. Of course every story needs a few villains. Whereas the video game culture would encourage the young adults to viciously dispatch their evil attackers, the healer bucks that trend, challenging us to show compassion.

The power to heal, like most God-given-gifts, is meant to be shared, and it comes at a cost to the healer. Remember the press of the mobs that flocked to Jesus, seeking cures. Let’s not forget the pushback from the religious authorities of Jesus’ day. Could that happen if a healer appeared among us today?

Billy Anderson, the healer, can’t heal himself. He struggles with physical infirmity, homelessness, encounters with the police, and the loss of family and close friends. He’s something of a teenage Job who asks, “Why does God allow suffering?” Even Jesus couldn’t heal everyone. So too, Billy endures the pain of helplessness as those he loves suffer.

Fortunately, he’s on good terms with God. He’s exceptional among his friends in that he fits an early Mass into the flow of his day and prays frequently. He’s ordinary in so many other ways, and he’s discounted by many. Billy gives himself as God’s instrument, serving as a seed crystal, about whom his community grows as a bright and shining gem. Billy is lost in the midst of this gleaming jewel. Those who give him a chance come away all the better for meeting him. Those who selfishly want to take something from Billy, may go away empty.

The author portrays realistic characters and situations. The dialogue and reading level are suitable for the young adult audience. The author keep his readers intrigued, and he finishes his novel with a punch the reader never sees coming. I’d say Healer qualifies as appropriate reading as we approach the Year of Mercy.

Susan Peek has introduced another of her friends in high places. Camillus de Lellis lived in the sixteenth century, a time of saints and turmoil. Nonetheless, his life and example relate especially well to our times. His résumé included life as a soldier, a veteran, a wounded warrior, a gambler, a drunk, a homeless person, a nurse/orderly, a hospital administrator, a founder of a religious order, and ultimately a saint.   With his father, a fellow mercenary, he chased armies, joined battles and spent his free time carousing and card-sharking. De Lellis sold his loyalty to the highest bidder, so his motivations weren’t always the most noble. After battles, he gambled and drank away his wages leaving him hungry, homeless, and reliant on his luck at cards.   A giant of a man, Camillus could have inspired today’s movie makers with his battlefield heroics. However, the real Camillus de Lellis stood in stark contrast to the current trends in action movies that present warriors as graceful, powerful, lethal, and photogenic, even after an hour of cinematic mayhem. The author provided a more honest representation of sword, musket, and hand-to-hand combat and its blood-splattered, weary and wretched participants.   Piety came later in the life of Camillus de Lellis and only after a series of false starts. Although he healed from his battle wounds, a mysterious and painful leg ailment dogged and humiliated him. It also disqualified Camillus from vocations that seemed well suited to his spiritual development. His temper and arrogance cost him jobs and sent him back into destructive behavior. Like the biblical Balaam, de Lellis finally saw the light with the help of an equine companion.   Susan Peek has written A Soldier Surrenders with love. She engages her audiences with the depiction of a man who shared many of our weaknesses, yet, despite his limitations, handicaps and bad choices, his example still encourages us to persevere in our pursuit of our calling to holiness. A Soldier Surrenders would serve as a sympathetic companion for us all, especially for those with lives shattered by war, chronic pain, homelessness, unemployment, or chemical dependency.