A gentleman, perhaps a trustee of The Old Burying Grounds in Halifax, Nova Scotia pointed out the tomb of this cemetery’s most distinguished resident: Major General Robert Ross. The gentleman added that Ross’ troops had burned the Whitehouse and the Capitol in Washington, DC and inspired part of the U. S. National Anthem. He said “assassins” shot Ross near Baltimore. His body preserved in a keg of Jamaican rum, was transported to Halifax where it rests in peace beneath this rained soaked stone. See the entire tomb below, as it looked in May, 2013.

Ross personally led his forces into battle and employed the latest innovations in weaponry against the forces of the newly formed United States of America. Rockets routed the American Militiamen during the Battle of Bladensburg, opening the path for the capture of Washington, DC during the War of 1812.

Ross’ rockets also inspired Francis Scott Key as he wrote the words to “The Star Spangled Banner.” Key negotiated with Ross for the release of an American prisoner, aboard a British ship of war. Ross extended an invitation to dinner, the scene of these amicable negotiations. Key was then given a ring-side seat for the storming of Fort McHenry during a night attack on Baltimore, in which Key observed the ferocious rockets’ red glare.

Unfortunately for Ross, as he led his forces into Baltimore, American snipers mortally wounded him in battle. Which sharpshooter deserves credit or blame we’ll never know since they both fired at the same time and both stuck Ross who subsequently died.

The tomb cover shown above mentions “Rosstrevor,” the site of Ross’ memorial obelisk in County Down, Northern Ireland. Another grand memorial to Ross stands in Saint Paul’s Cathedral, London. Even the U. S. Capitol’s rotunda memorializes Ross with a portrait.

May he rest in peace. 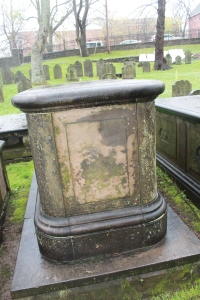