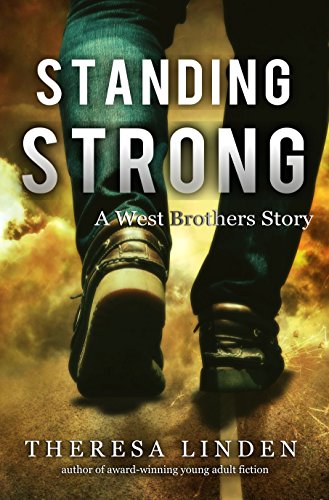 The tagline for Standing Strong—Theresa Linden’s most daring novel—reads: “Blessed is he who is not scandalized in me.” Most young adult novels ignore the spiritual life, some ridicule it, or replace it with fantasy. Standing Strong embraces spirituality—with a strong Franciscan flavor—as God shapes the lives of Jarret and Keefe West, and brings peace to their family.

Readers of the first three West Brothers novels know Jarret as narcissistic, manipulative, and cruel—a teen just waiting for karma to catch up with him. His favorite targets include his twin, Keefe, an unwilling accomplice, and their younger brother, Roland—Jarret’s frequent victim.

Rather than karma or Satan, it is mercy that catches Jarret. Like Saul on the road to Damascus, Jarret resets his priorities, sincerely attempting to amend his life. He admits his mistakes and avoids the people, places, and circumstances associated with his earlier misdeeds. He shows genuine compassion to his family, friends, and even his enemies. Unfortunately, he grows overconfident, and the lure of his deeply ingrained habits and the expectations of his classmates impede his spiritual progress. He finds himself rejected; crying out, “God, why do you make this so hard?”

Keefe, Jarret’s perennial foil is so used to deferring to his brother, their father, and anyone who challenges him that he stalls on his journey to the religious life—mired in self-doubt, and his fear of wrath, ridicule, and rejection. Can he make the leap of faith, faith in himself and his calling, despite the apparent obstacles and contradictory signs? Can he embrace the scandal of Jesus?

The author devises an elaborate series of subplots that pit Mr. West, Roland, and his friends, Channel—Jarret’s voluptuous girlfriend—, and strangers along the road who deflect the West twins from their holy trek.

Standing Strong appeals to a wide audience, especially troubled high school students and those contemplating the religious life. Theresa Linden’s research into adolescent psychology and the life, legends, and spirituality of Saint Francis of Assisi erects a sturdy framework through which she threads her themes.

The author shared the pre-publication copy of Standing Strong that enabled this review. I thank her and applaud her creative spirit.